I'm very excited to be part of Riley Blake's first low volume designer fabric collection, Hush Hush. If you're a lover of low volume prints, this is the line for you. 21 RBD designers have each contributed one print to create a great collection perfect to use in all your projects. To celebrate the launch, a bunch of us are sharing a little blue bird project using prints from Hush Hush. Oh and it gets better - the patterns we used are available for free download so you can join in the ... END_OF_DOCUMENT_TOKEN_TO_BE_REPLACED

Kicking off sewing on the 15th October. I'll be hosting a SAL to create the Heartfelt quilt! This version is made using my second collection for Riley Blake Designs, Dream - and it really works beautifully in rainbow. The pattern is a foundation pieced quilt that creates a wreath of hearts - but also a secondary pattern of a star in the centre. It measures 48" square. You can also grab a kit which includes all the fabric and the printed pattern from your favourite quilting store - plus ... END_OF_DOCUMENT_TOKEN_TO_BE_REPLACED

I'm very excited to officially share my second fabric collection for Riley Blake Designs. Meet Dream! It's no secret I'm a huge fan of rainbow - this is a rainbow lover's dream (pardon the pun ;) ). There are 24 prints in this line, in all the colours. This line takes that one step further and includes actual rainbows on the prints. You'll also find hearts, raindrops, clouds and clamshells throughout the collection. These prints work beautifully as tone on tones, or for a little bit of ... END_OF_DOCUMENT_TOKEN_TO_BE_REPLACED

Foundation paper piecing is a great technique to have in your quilty repertoire. It's a way of quilting where you sew the fabric onto a paper foundation. It's an excellent way to give really crisp angles and points that are sometimes hard to achieve with traditional piecing. Because you're sewing onto paper, it can feel a little counterintuitive at time. But once you get the hang of it, it's basically sewing by number ;) I have put together a PDF with instructions and diagrams on how to ... END_OF_DOCUMENT_TOKEN_TO_BE_REPLACED

I am very excited to introduce my first fabric line for Riley Blake Designs - Create - available in July 2020. While I would love to be showing you these prints and projects in person at Spring Quilt Market, circumstances are a little different this time around. But the excitement level is still pretty high here - so brace for a whole bunch of pictures coming your way. ;) Full of rainbow, bright colours and geometric shapes, this collection is designed to encourage quilters and sewists ... END_OF_DOCUMENT_TOKEN_TO_BE_REPLACED

A long time ago, in a galaxy far, far away... (okay so actually it was just six years ago and in a different state) I designed a whole bunch of LEGO Star Wars character patterns. The reason for that was my son was turning six and he was (and still is) a mad keen Star Wars fan. He had (still has) all the LEGO, the games, the movies... and the LEGO ones were his favourite. I turned the blocks into a throw quilt (shown above). Then unpicked all the quilting and added larger borders to make ... END_OF_DOCUMENT_TOKEN_TO_BE_REPLACED

To see the latest, check out @quietplay on Instagram

The geometric star pattern is one of my favourites

A lil sneak peek look at an upcoming pattern! This

A rainbow of selvedges! I really love seeing them

I’m super excited to share a little bit of news!

Imagine! Here are alllll the prints together in my

This rainbow thread with this quilting by @leanne_

Loved chatting with the @phxmqg on the weekend and 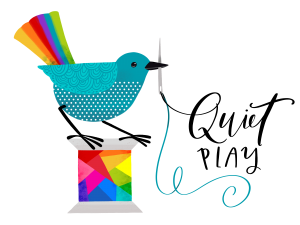